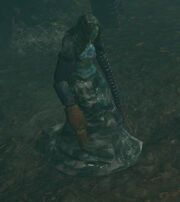 Any who lived in Carian, both before and after the city's fall, have heard the tragic tale of Merveil, the maiden. She was Carian's shining beauty, the envy of women, the conquest of men. Alas, her fate was a dark one. The lady was corrupted by a mysterious gemstone, which drove her insane before it twisted her body as much as her mind. Merveil was married to one of Wraeclast's most famed swordsmen, Daresso, who won her hand with the unwitting present of the jewel that ultimately destroyed her. When his bride had become hopelessly ruined by the cursed stone, and when her growing madness threatened his own life, Daresso abandoned her.

In her grief, that pathetic girl exiled herself to the coast, where she remained for years, growing ever more disfigured and powerful. She hid from the sun by day, but at night she would stand in the surf, weeping and singing to the waves, beseeching her lost husband to return to her. Merveil's tears mixed with the waters of the sea, producing a dark alchemy of rage and magical corruption. The taint of her grief imbues the briny waves with life, filling them with a deadly energy and purpose. Anyone foolhardy enough to venture into Wraeclast's countless swamps and bogs may well find themselves beset by the dreaded Water Elementals, born of Merveil's sorrow. They appear as rippling columns of animated, brackish water that slide over the earth, bent on destruction.

Merveil's tears can manifest as an Elemental in any body of water on Wraeclast. From a small pond, to a waterfall, to the ocean itself, nothing is free from her wrath and corruption. The Elementals appear out of nowhere, bursting up in a violent spray. They attack with makeshift appendages fashioned from the scavenged bodies of dead sea creatures, and they are extremely difficult to defeat.